Do You Know If You Have Chrysotile Asbestos? 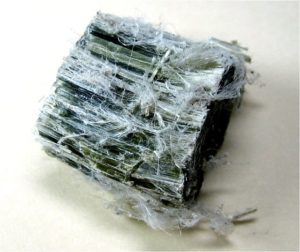 A client called distressed about what her handyman had found in the crawl space beneath her house. There was white dust on the ground under the heating pipes that had recently been remediated of asbestos insulation. She was afraid it was asbestos and wanted it tested.

Crawl spaces can be pretty tight to maneuver around in and being suited up in protective gear with a respirator makes it even tighter. The New England farmhouse was over two hundred years old and had been very well maintained, so all the building materials were original, including the heating pipes.

The entrance to the crawl space was accessed from a partial cellar where the boiler was located. Since there was a concern about asbestos, every suspicious looking piece of debris noted and sampled. The white debris in the photo below tested negative for the presence of asbestos. 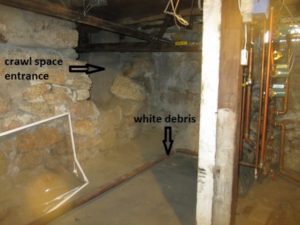 The crawl space floor was bare dirt and as such is vulnerable to moisture intrusion in the form of water vapor and liquid water wicking in from ground water. When this happens in soil that has some mineral salt content, the salts can dissolve in the water and be transported to the surface with the water. When the water evaporates, the salts are deposited on the surface of the soil. This is the case in the photo below. The microscopic image of the white salt deposit shows the sharp crystalline structure of the sample. The miscellaneous fiber in the image is not asbestos. 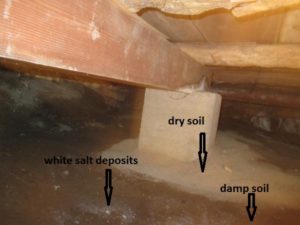 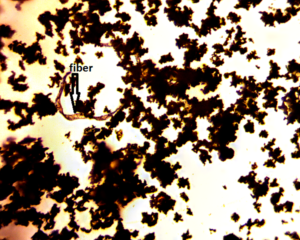 Although the worrisome dust was only salt deposits, there were other areas of concern. The heating pipes did not have insulation around them anymore, but were not entirely clean either. Cotton like fibers hung from some pipes. These were collected and analyzed, but tested negative for the presence of asbestos. 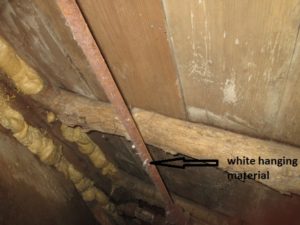 What are My Immediate Asbestos Concerns?

At this point, the immediate concerns of the client had been addressed, but an area above the heating pipes showed some splattered material on the floor boards. We could only speculate as to how this material got there but the proximity to the heating pipes made it suspicious. 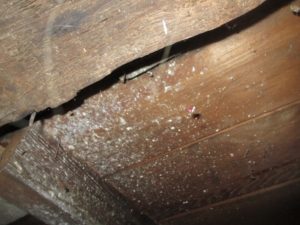 Two samples were collected. As it turned out, when tested, the lab report showed positive presence for chrysotile asbestos fibers in both samples. The danger of this little bit of left over asbestos containing material is that it was friable, meaning it could easily crumble with a little hand pressure, releasing asbestos fibers into the air.

The client was advised to forward the report to the remediation contractor who had done the original work.

Our goal is to provide home and business owners the means of achieving healthy indoor environments for their families and employees.